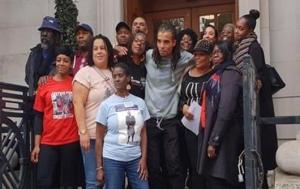 During 2017, 4WardEver UK and the United Families & Friends Campaign (UFFC) had put their support behind new research conducted by Dr David Baker of Coventry University, examining custody deaths from the viewpoint of the families that are affected.  See previous update >

The first paper arising from that research has now been published.

‘These people are vulnerable, they aren’t criminals’: Mental health, the use of force and deaths after police contact in England;

Dr Baker told us; “In January last year I sent a document that presented an overview of the project’s key findings in order to keep you in the loop with how the project was progressing. Only the families involved in this project received that document”.

“I’m pleased to attach the first article that has been published as a result of the research project. It focuses on mental health issues and deaths after police contact, and is published in Police Journal: Theory, Practice and Principles. This is considered to be one of the most important academic journals on policing in the UK.”

This paper considers deaths after police contact in England of people experiencing mental health issues. It uses rich qualitative data from interviews with the families of nine people who died after police contact to examine how they died. The paper aims to assess the police role in providing a de facto service for people undergoing mental health crises and how the use of force might affect the outcomes of such encounters.

Tippa Naphtali, founder of 4WardEver UK, responded to Dr Baker saying;  “As ever, thank you for your consideration and thoughtfulness in representing the views of participants to the extent you are able. For me the most important thing is that these papers are seen and read by key audiences and hopefully help to shape better policies and practices.”